For the seventh year in a row, the Museum of Yugoslavia in partnership with the Association of Automobile Historians organizes the event Hanging Out with Fića and Vespa. This year, it will be held on Saturday, September 1, starting at 10.00, on the plateau in front of the Museum of Yugoslavia. The main goal of the project is to promote the Yugoslav heritage among the local community through a fun and educational program.

We are addressing you with a wish for you to participate in this year’s event by inviting your members to attend with their Fića’s and to be part of the exhibition dedicated to this prominent Yugoslav symbol.

Program of the Hanging out with Fića and Vespa:

10.00 – 12.00 Children’s workshop Color Your Fića
11.00 – 13.00 Voting of the participants and the audience for the most charming Fića and Vespa
12.00 – 12.10 Presentation of the book Life in the Power of the Engine about Professor Mihailo Borisavljević – presentation by Nebojša Đorđević, President of the Association of Automobile Historians
13.00 – 13.15 Announcement of the winners for the most impressive Fića and Vespa, and awarding prizes
13.15 – 14.00 Socializing on the Museum’s plateau 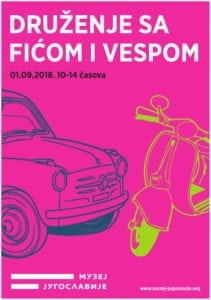 Fića (Zastava 600, 750, 850, under the license of the Italian Fiat) is a car that, since the mid-1950s, has become a symbol of motorization of the former Yugoslavia and a distinctive feature of this area. Being in possession of Fića meant the beginning of a better, more modern life and achieving a certain standard of living. From 1955 to 1985, in the factory Crvena zastava from Kragujevac, 923,487 copies of this popular car was produced in 11 basic versions. A total of 35,529 pieces was exported in 15 world countries.

Fića was also used in the services of the police, ambulance, post office, in all driving schools, in the service of the AMSJ, and in many companies as a service vehicle. It was a very prominent participant in car races in Yugoslavia and it brought many trophies to those who drove it. This car played an unforgettable film role in Goran Marković’s cult film National Class. Although not long in production, its popularity in the region has been growing, accompanied by numerous Fića parades.