Moving can often be stressful. One should be mindful that everything is well packed and accurately marked, so that nothing gets lost, so that majolica plates and vases that grandma brought as dowry are not accidentally broken, etc.  In the scope of the reconstruction of the Museum of Yugoslavia, the task of moving the storerooms and temporary storing of objects in a new space was set before the curators, until the storerooms are renovated and equipped with a new storage cell. The plans of movement were worked out to the every last detail, assigning the curators into teams in charge of each storeroom, creating a precise documentation system to keep everything in order, carefully packing the items for months and preparing for this great event. And then, on Friday, March 23, the moment has come – the moving begun.

The first was the storeroom where the rich art collection of the Museum is located – over 1000 paintings and graphics and about 300 sculptures. A team of four curators got help from the crew in charge of carrying the items. For curators in charge of other collections, photographic or archaeological one, this was an ideal opportunity to get acquainted with another collection better, while people from the crew enjoyed an exhibition of sorts of some of the most important Yugoslav authors. Petar Lubarda, Krsto Hegedušić, Oton Gliha, Milo Milunović, Đorđe Andrejević Kun, Frano Kršinić are just some of the names whose works grace the art collection of the Museum. 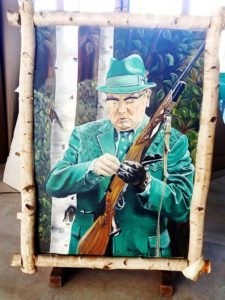 However, in addition to the works of prestigious artists, this collection also includes over 200 amateur works or works of unknown artists, those that were sent as gifts to Josip Broz Tito and probably saw the light of day during the moving for the first time after many decades. As we admired Lubarda’s Prometheus and carefully carried Augustinčić’s sculptures, we had the opportunity to enjoy in the landscape of Zagorje made of straw, as well as in the very realistic portrait of Tito hunting, in a frame made of birch twigs. 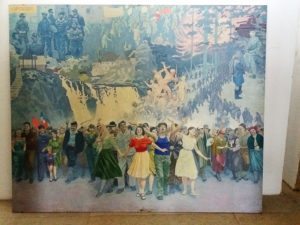 One of the hidden jewels that we had the opportunity to see, which certainly deserves to be mentioned, was the painting Creating of the New Yugoslavia. This work could easily be transferred into a mural in the style of Diego Rivera at the Presidential Palace in Mexico City. After several days of work, which was as hard as it was fun, the storeroom was empty for the first time since the construction of the May 25 Museum. With the utmost caution, according to a pre-arranged plan, the objects were moved to another area, waiting to be placed on new shelves in a refurbished storeroom.