From Tuesday, December 11, 2018, a multipurpose facility, K25, will be opened in our complex. After almost four decades, the old and temporary ticket office has been reconstructed and converted into a facility that not only takes into consideration the elementary needs of the visitors, but also awakens their curiosity and helps them to form a bigger picture of the complex and the work of the Museum of Yugoslavia. The needs of more than 120,000 people who visit the Museum of Yugoslavia a year were the imperative that we complied with by the reconstruction and extension of the former entrance point. 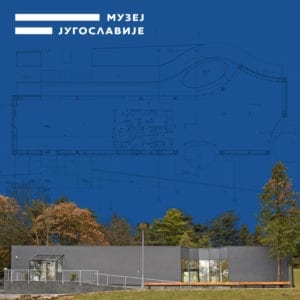 A modern ticket office, gift shop, coffee room with a garden, and toilets are placed in the area of 200 square meters. In terms of design, the object was planned as a simple form and specific composition that does not impose a burden, but defines the museum complex in a way required by the objects and the representativeness of the park, seeking to merge with the natural environment.

Although multifunctional, K25 is flexible and it interacts with objects in the complex and with the park of sculptures. Its most important role is to be a place where a visitor will find a motive to explore something new and unknown, or to kindle their desire to come back again.

The designer of the reconstruction and extension of the object is Prof. Mihailo Timotijević, from the Faculty of Architecture in Belgrade.

The works on the reconstruction and extension of the facility were funded by the Ministry of Trade, Tourism and Telecommunications and with the funds of the Museum of Yugoslavia.