Behind the scenes: fine arts curator on the marking of 75 years since the end of WWII

Ana Panić, curator of the Museum of Yugoslavia

When we started talking about the objects that we consider important to exhibit on the occasion of the 75th anniversary of the end of the Second World War, I immediately had in mind a picture of two sculptures of victory from the Collection of Gifts to Josip Broz Tito – fine arts for which I have been in charge for 15 years. Although they were exhibited on similar events in 2005 and 2015 – at exhibitions organized by the Museum on the occasion of the 60th and 70th anniversary of the victory over fascism in the Second World War, I did not really have much information about them. In the museum documentation, both are listed as works of unknown authors and are exhibited as such. Both were located in Tito’s Belgrade residence in Užička 15, in places that were not particularly prominent, one in the Billiard Room, the other in the Gallery on the first floor. 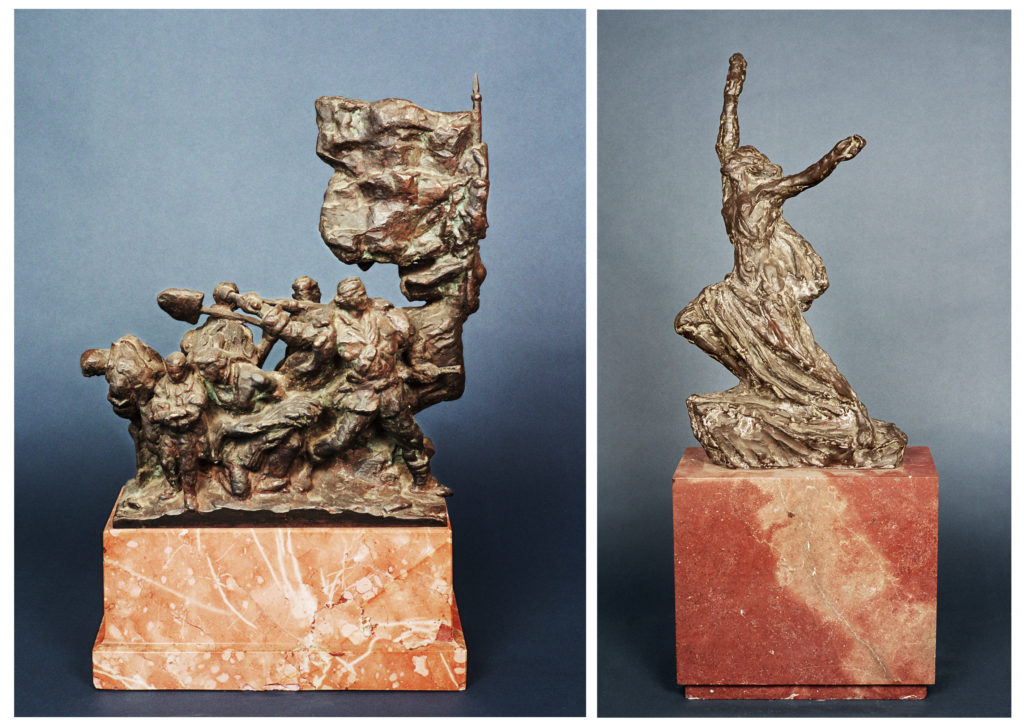 Looking at these two sculptures next to each other, both made of bronze and placed on a pedestal of red marble, I was particularly interested in something that first caught my eye – both sculptures are dominated by a female figure. Namely, it is about accepting and exploiting old norms such as “Liberty Leading the People”, which seek to adapt to new narratives. A very interesting composition, with as many as seven figures on the pedestal, bears a dedication plaque with words, “To our teacher and dearest friend Tito. Party organization at the Central Committee of the Communist Party of Yugoslavia, May 25, 1950,” engraved in Cyrillic, as well as a signature telling us that the sculpture was cast in the famous and one of the oldest art foundries in Serbia, “Plastika”, where the most important Serbian and Yugoslav sculptors made their works; the foundry was located not far from the also famous cafe “Stara Hercegovina”, in Belgrade, and it was recently demolished although it was protected as a cultural monument. Although I have not yet been able to find out who the author of this quality sculpture is, we can assume that it is a study for a monument that has not been realized. The female figure, unlike Liberty in the famous painting by Eugene Delacroix, does not communicate with the representatives of the people who she leads to a victorious assault. She does not look back, with the flag raised in front of her, she is looking ahead, to the future, and is accompanied by figures of fighters with weapons, workers with hammers, axes and pickaxes, and female peasant with ears of corn, which speaks of the inseparability of class struggle and armed resistance to fascism, at the same time celebrating the values of gender equality developed in the Second World War, through a female figure with a pencil that symbolizes the enlightenment of women through literacy in illiteracy courses as a prerequisite for achieving equality. 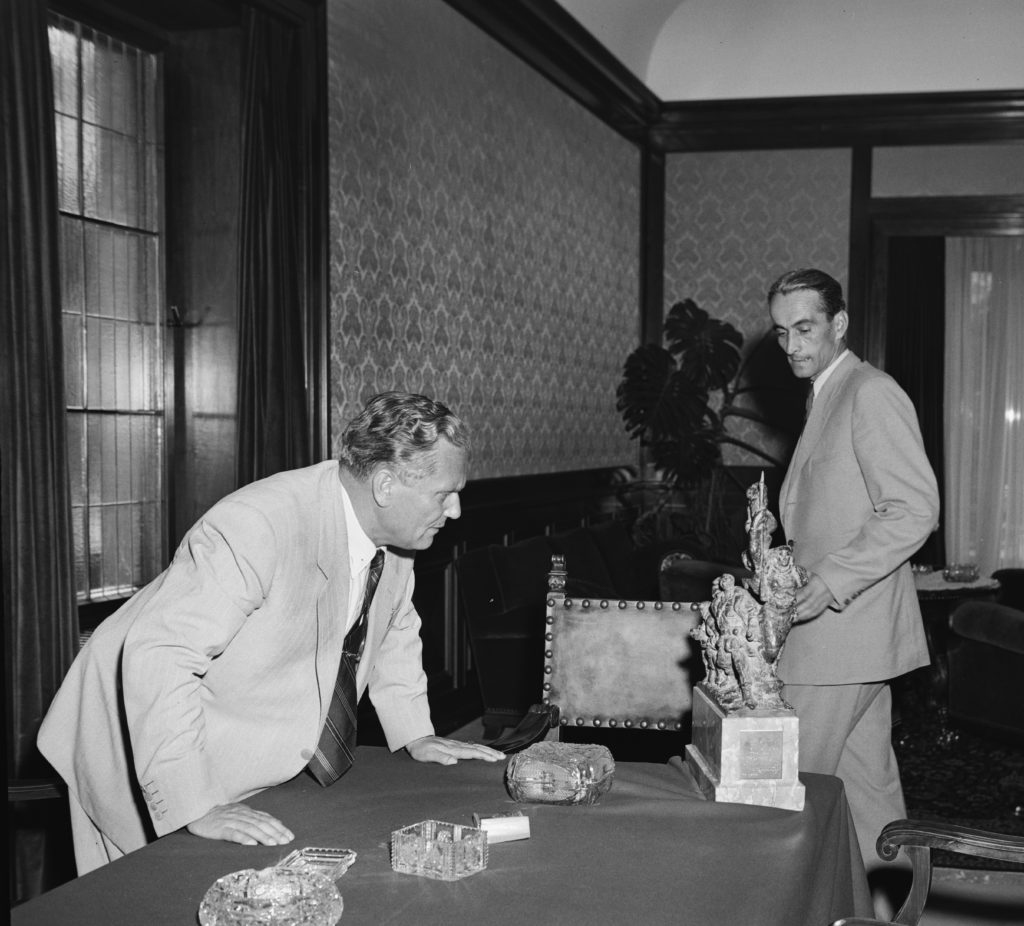 Reception of the delegation and gifts from the party organization at the Central Committee of the Communist Party of Yugoslavia
on the occasion of Tito’s 58th birthday, May 24, 1950

The second sculpture is a study for the monument to the Red Army, “Liberty”, in Bratislava by the sculptor Jozef Kostka from 1946. In correspondence with colleagues from Bratislava (Institute for the Protection of Cultural Monuments, Bratislava City Museum, Bratislava City Gallery, etc.), I learned that the monument was unveiled in 1950, on the fifth anniversary of the liberation of Bratislava, and that it was a central state monument dedicated to victory over fascism. Every year, on April 4, on the day of the liberation, next to the monument, great commemorations take place with the participation of officials. 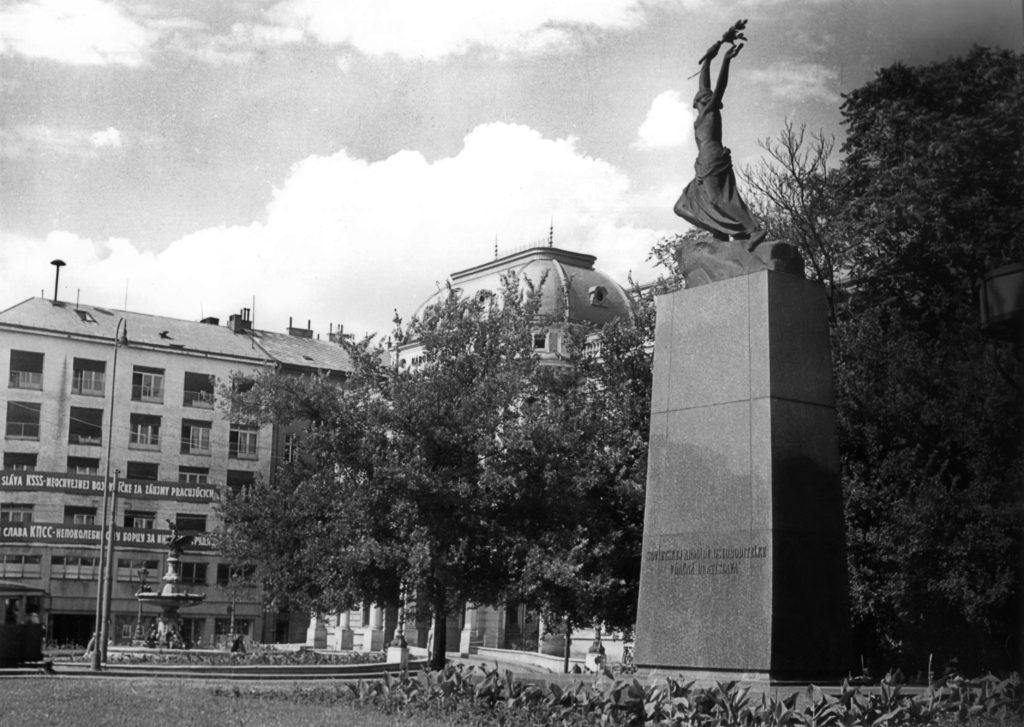 It was this knowledge that made me wonder what was the official monument to the victory in the Second World War, what is the central place where we celebrate the victory over fascism with a state ceremony, if such a place existed at all. In recent years, it has definitely been the Cemetery of the Liberators of Belgrade, and lately, on Avala, a wreath-laying ceremony has been customary at the Monument to Soviet Veterans, who died in a plane crash on October 19, 1964, arriving at the celebration of the twentieth anniversary of the liberation of Belgrade. For the last five years, we have had the manifestation “Solemn March of the Immortal Regiment”, and since last year it is supported by the Government of the Republic of Serbia. The attitude towards the past is not unambiguous, it is contextual and, if necessary, it changes in order to correspond to contemporary identities and public policies in accordance with the so-called self-service syndrome, when one enters the past like in a self-service store in order to take only what is needed, in the quantity needed at the moment. We remember the change of the military parade’s date to coincide with the arrival of high-ranking Russian officials, as well as the change in the names of Marshal Tolbukhin and General Zhdanov streets in the city center after decades. After that, two streets on the outskirts were hurriedly named after them, again before the arrival of Russian officials, and since the 72nd anniversary of the liberation of Belgrade they got another street each, this time in New Belgrade, so that now there are four streets in Belgrade named after these two Red Army military leaders!

Let’s go back to the sculptures from the Museum’s collection… The sculpture for the study for the monument in Bratislava is typical for post-war works under the influence of Soviet socialist sculpture, such as those that we had in the first post war years when there was an ideological closeness to the USSR, such as Augustinčić’s “Monument of Gratitude to the Red Army” near Batina on the Danube, erected in 1947. In the early 1950s, we still find monuments celebrating the victory symbolized by a female figure, such as the monument “Liberty” on Iriški venac, the top of Fruška Gora, the work of our famous sculptor Sreten Stojanović, or “Monument to fallen fighters and victims of fascist terror” in Subotica, by Toma Rosandić, to be replaced with monuments to fallen soldiers and innocent victims, arising from the need to preserve the memories of all those killed, the horrors of war, fighting and suffering, and to homogenize the multinational, multiethnic and multireligious Yugoslav population. The common past and the heroic age of the People’s Liberation Struggle and its victims, which brought freedom and a better future, were glorified as an integrative factor that gave legitimacy to the new Yugoslavia.

In Yugoslav monumental sculpture, liberation and victory were usually represented through the depiction of victims and/or soldiers, for which we also have excellent examples in the museum collection. 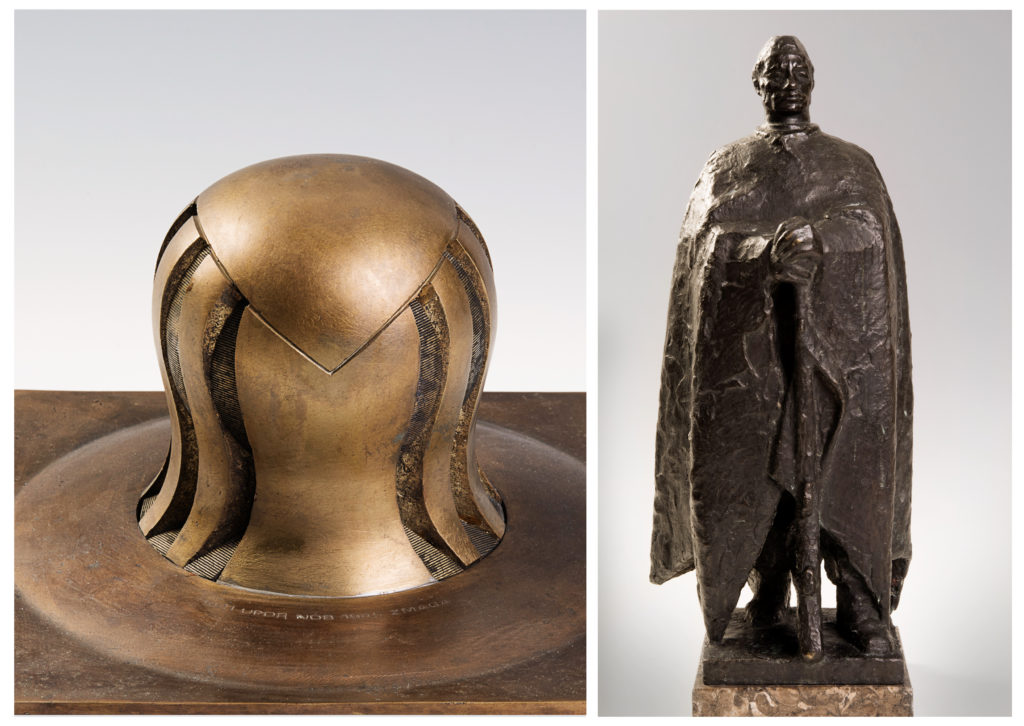 A spherical monument depicting fallen fighters, 7.4 m high and 6 m wide, is still located today on Freedom Square in the centre of Maribor, where it was erected on November 27, 1975, and it symbolizes the role and significance of the People’s Liberation Movement in Maribor during the German occupation in the Second World War. Around the monument, there are public announcements about the execution of about 667 people who were sentenced to death by German forces. The day when the Communist Party carried out the first sabotage action against the occupiers still lives in the collective memory of the citizens who celebrate April 29 as one of the official holidays of the city of Maribor.

Unlike Maribor, Dubrovnik no longer has its central monument to the fighters of the People’s Liberation War, “A soldier on Duty”, which, on the occasion of the tenth anniversary of the liberation of Dubrovnik from fascism in the Second World War, was ceremoniously unveiled on Veterans Square (today Arms Square), next to the Old Town Wall, in 1954, and in two attempts demolished in 1992 with a large amount of planted explosives. The pedestal and the remains of the monument were removed as if it had never been there.

Today, 75 years since the victory over fascism in the Second World War, and after the experience of the wars of the 1990s, we can only wonder which victory we are celebrating, whether we defeated fascism or, as Albert Camus warns us, ‟the plague bacillus never dies or disappears for good; that it can lie dormant for years and years in furniture and linen-chests; that it bides its time in bedrooms, cellars, trunks, and bookshelves; and that perhaps the day would come when, for the bane and the enlightening of men, it would rouse up its rats again and send them forth to die in a happy city”.