Ahead of the discussion program that accompany the Museum of Yugoslavia’s exhibition, The Nineties: A Glossary of Migrations, named Safe Country?, which speaks about anti-Roma policies in Europe, we talked with artists Rena Rädle and Vladan Jeremić, who also participate in the exhibition. Besides them, in the interview (scheduled for Saturday, January 25, at 4 p.m.), moderated by an associate of the Museum of Yugoslavia, Mira Luković, other participants will be Dejan Marković, president of the Forum of Roma People in Serbia, and Saša Barbul, Roma director.

Rena Rädle and Vladan Jeremić live in Belgrade. Their artistic practice includes drawings with text, video, photography, installations and interventions in public spaces. Through a common practice, Rena and Vladan investigate overlapping areas of ​​art and politics, exposing flagrant social contradictions. They develop transformative potentials of art in the context of social struggles. In cooperation with the social movements, both of them are engaged in debates and expand their work in various media reproductions.

The exhibition The Nineties: A Glossary of Migrations also displays their installation, Housing – Safe country, which through years of research has been dealing with the question of housing, aspects and causes of the migration of the Roma population. Their artwork shows the anti-Roma consensus in Europe, but also provides a perspective of hope by proposing housing policies and forms of solidarity. 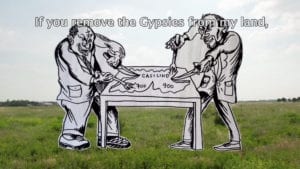 As you say, in your work you investigate the area where art and politics overlap. With this regard, how would you define that overlapping in your practice? How do you understand the function of art in the current moment?

Contemporary art has lost the importance it had in the twentieth century. The prevailing trend in art today is a business model in the field of finance and trade, where objects are produced purposely for that kind of exchange. In the best case, the task of art has been to innocently question the system and foster the autonomy of artistic fields, although it is clear that the existence of such fields is questionable. In today’s environment of artistic production, we want to think about the use-value as opposed to fetishism of exchange value and to spawn a practice for a specific use in a specific time and environment. Our practice has been developed after worn-out forms of contemporary art and it has tried to overcome the world of art through the social practice, which inevitably draws politics into play. Distribution of the artistic process here can take place through the “political use-value” rather than the exchange of values through the art market. The participation of other “non-art” drives in the production, distribution and reception of work is also important. The aim of this practice is to create organizational and political forms of production and distribution of art criticism, which represents emancipatory directions. 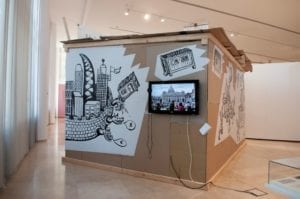 Since you work in a variety of contexts (public institutions, public spaces, civil sector, etc.), to what extent you engage that in the reflection and articulation of the work itself? Also, do you think that these conditions affect the status and interpretation of your work, and if so, in what way?

Different levels of institutionalization and organization influence the process of formation and creation, and therefore the interpretation of a work. When we start the artistic research, we first try to build a relationship with economic, ideological and political aspects of the research, as well as with an object of the research. We take into consideration that any kind of institutionalization also includes the creation of a certain ideology, which affects the interpretation. A possible transformative practice can critically handle the existing ideologies and formations in order to improve and test their utility value for a particular purpose. It is not always possible to manage because there are some fixed institutional ideologies. We try to use artistic process as a functional element in concrete social contradictions, and not to create any new artistic ideology. In that sense, the possibility of transformative art practice has been consciously realized in coalition with social emancipatory forces, but they may be in the framework of public institutions, public space, civil society, trade unions or social movements. We want to say that the very form of organization and the level of institutionalization does not always fix the role of institutions in society, but that factor itself is subject to transformation. It can sometimes succeed only partially, but sometimes it cannot succeed at all. Nevertheless, it is important to try. 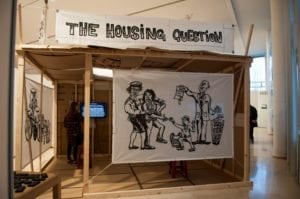 For you, as creators, what does it mean to expose your work in a public space, and what positioning within an institution?

We don’t see that a sharp division of open space versus interior of an institution, rather we try to first to look at a level of institutionalization of every social organization. A public space can also be institutionally controlled though at a first glance it may seem that it is not. It is also subject to complicated social rules. Working with an institution implies recognizing the potential of existing concepts and meaningful rearticulation of certain practices, putting them into operation in the current conjuncture, in terms of intervention in a given social context in alliance with the social emancipatory forces. This practice, which we advocate, therefore, is transformative because it does not completely reject the existing concepts, nor it deals with the appropriation or making collages of entire elements of other works of art in terms of citations or ready-made concepts, as contemporary art does. We can say that our practice itself tends towards institutionalization in the sense that it turns to research, analysis and articulation of certain social contradictions, with the participation of other social factors. For example, from a public discussion with scientists and politicians about the framework of The Housing Agenda Helsinki Housing Manifesto stemmed, which would later be submitted to the European Commission by Roma organizations from Finland, as recommended in the solving problems with housing. 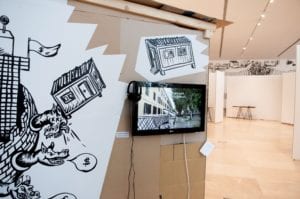 We’ve been dealing with that issue since 2004, when we met people under the Gazela Bridge in Belgrade. That settlement ceased to exist in 2009. Since then, we’ve been dealing continuously at various levels with the problem of racism, manifested by the majority population. In that sense, our work does not deal with the Roma population as such, but with the relationship that produces the exclusion of certain groups of people. The aim of our work is to try to find solutions, and to organize specific measures in order to improve lives and work of people on the margins of society, which has directly resulted from the artistic work. We’ve mentioned the Helsinki Housing Manifesto that has brought practical, applicable housing solutions and has so far represented a usable document for many practitioners and politicians. Let’s go back to the source of the problem –racism. It has an economic dimension and a political determination and can serve the ruling classes for the regulation of the labor market, i.e. through racism and legal mechanisms of social exclusion, such as the denial of basic human and social rights, the right to decent work, movement and personal documents, and it can easily stigmatize a particular social group. The most common triggers for the mechanism of exclusion and stigmatization are skin color and ethnicity. Antiziganism is therefore one of the oldest forms of European racism, and we saw its escalation during the Second World War, in the form of genocide. Antiziganism means hatred against Roma, their marginalization and persecution around the world. Marginalization of the Roma persists in Serbia, according to most indicators, and after the great march towards joining the EU, it becomes clear that in almost all spheres living conditions for these people haven’t been improved. 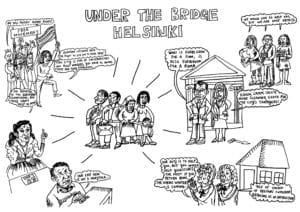 What are the scopes of artistic engagement in highlighting social problems and in encouragement to solve them?

If the scope of the engagement remains only in the artistic field, it is really insignificant. That’s why we advocate transformation of art, going beyond artistic practice and merging with political and social practice. Going beyond the specialized field of one area is always a painful process because such a transformative practice is often in contradiction with the basic ideology of the autonomy of art and the aesthetic fetishism. In cases when just one side is explicitly taken (partisans), abolishing “objective” passive position of contemplation, a new autonomy has to be founded, but now in relation to the moral and legal categories stemming from the dominant liberal ideology (art for social change). Transformative artistic practice that we propose is not an aestheticization of the political or social (in terms of transfer of non-esthetic ideology to the artistic field) because it involves social actors themselves and it is realized in the social field. In this way, through post-production and reproduction of our artistic products in different media formats (billboard printing, use of recycled materials, non-permanent drawings on the walls) and different rather environment-friendly approaches, the artistic process is deprived of its fetish status.