It’s hard to appreciate the beauty of a world when one doubts its very validity.

Since the very first one, the ruin of ruins in the Garden of Eden, ruins have been our fate.

Until the advent of the Industrial Revolution and its rapid development in the second half of the 18th century, man had no dilemma when it came to ruins, whether he worshiped them as shrines, revered as memorials, discovered the beauty of the past times in them or used their materials for some new buildings. With the beginning of the modern age, man discovered a previously unknown kind of ruin – empty objects of obsolete technological processes. Awareness of their other value, as parts of the collective heritage of a huge number of people who had used them and lived of them, developed slowly, so that these objects were mostly forgotten and left to the ravages of time. Even in the more developed areas, rare objects have been converted into museums in situ. On the contrary, the emergence of modern ruins was surprising, it did not fit into an already established perception according to which the concept of a ruin was linked to the ancient Roman and Greek buildings, Gothic castles and monasteries. 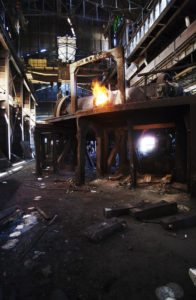 In recent decades, the problem of destruction and decay of the industrial, i.e. cultural heritage, has particularly been addressed by photographers. Their working mode has been a matter of debate. While some feel that they establish specific, new aesthetic order with their photos and raise the awareness among people about the endangered state of the of given facilities, others accuse the authors of sensationalism, one-sidedness in their presentation, of enjoying in the aesthetic and visual elements of human tragedy, of amusing the privileged with those photos, without pointing to the real causes that had led to such a state, that their photos are soulless and static, that they never show people, derogatory calling this approach ruin porn.

Here, on the site of another conflict between aesthetic and ethical, it should be brought to mind that the aesthetic sense of a person, as opposed to the ethical, develops very quickly, because people, although not quite aware of what they are and what they really need, as a rule instinctively know what they do not like and what does not suit them. That a human being is, in the anthropological sense, more aesthetic than ethical being.1In our case, this means that it is natural to highlight every ethical problem via the aesthetic display.

Photos by Rifat Kulenović affect you like amnesia. You see hundreds, thousands of them; they irresistibly resemble one another, especially the interiors, but at the same time you do not feel bored, not even for a moment. That is why they are miraculous.

On this occasion, the author shared his dedication and love for the buildings befallen by the evil fate with his colleague, Ada Vlajić, who has lately persistently followed him on sad cruises across Serbia.

Ruins are persistent. Waiting for better days, they remember that they were useful once and they continue to do that.

Although lifeless, they give life – within their walls, birds nest, animals hatch; from their cracks wild flowers and vegetation flourish.

They have no walls, but they protect, homeless and lovers have found shelter within, fugitives and outlaws used to hide among them.

They are mysterious, they excite our imagination. Abandoned and disabled, they arouse sympathy in us.

Poets and artists, archaeologists, curious adventurers all love them.

Others look away when they pass them by, remembering some better days.

Ruins should be left in peace.